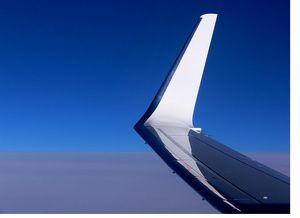 Anyone who has ever taken flight lessons knows about a problem called the wingtip vortex. Described online as “the twin tornadoes formed by the difference between the pressure on the upper and lower surfaces of an airplane’s wing” – the wingtip vortex actually creates quite a dangerous situation for any plane because if you fly too close to a plane in front of you, you could get caught in this twin tornado and lose control of your aircraft. When it comes to commercial flight, it is the wingtip vortex keeping flights from landing closer together, which would speed up landings and takeoffs – helping with the new crushing volume of flights happening right now.

As it turned out, an engineer from NASA back in the 60s had already pioneered a simple solution to this problem which no one was using because it seemed too complicated to implement on already built aircraft. He demonstrated that by turning the end of a wing up in a vertical direction, you could reduce the wingtip vortex to almost nothing. More importantly, turning the wing in this direction made flying vastly more fuel efficient. As fuel prices spiked dramatically in the 90s, domestic airline carriers refitted thousands of aircraft with these vertically turned “winglets” to take advantage of the new design.

What does the story of the winglet have to do with your small business? It is a reminder that sometimes a simple and obvious solution can streamline how you operate, save you money and perhaps even reinvent your entire industry. Winglets in business can come from anywhere. They can be a pioneering new business model like what eBay had when they created a website and anyone could name the price that they were willing to pay for anything, and the seller would decide whether to accept it.

James Dyson created a winglet  when he imagined a new vacuum cleaner which provided better suction and operated without the bags. Sometimes winglets are hard to think about because they often solve problems that people have learned to live with. Pilots had been compensating for the wingtip vortex for decades. Vacuum manufacturers were happy with the status quo of making their money on the replaceable bags and consumers didn’t know any better.

The real challenge for any of us is to find enough time to step back enough from the day to day pressure of running our businesses to think about where our own winglets might be. My challenge to you is to try and find the time to do it … because the impact to your small business could be huge.

This post is republished from the original article I wrote for the American Express Open Forum website. It is part of "Small Business Friday" on this blog – a featured series on ideas and marketing techniques for small businesses.

To read more articles like this, visit the "Small Business Friday" category on this blog.