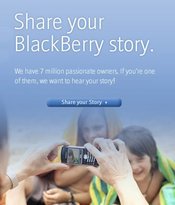 Blackberry’s recent "Share Your Stories" campaign was inspiring for me, though probably not in the way they intended.  I actually love my Blackberry, but their entire "Share your Story" campaign just struck me as lacking in any of the lessons many other marketers have learned about Web 2.0 marketing and what works in social media.  The mistakes were so basic, that it led me to put together this post listing a few of them and some reactions for how they could have been avoided.  As more and more consumers continue to find ways to interact with brands that they are passionate about, the popularity of UGC campaigns will continue to rise.  Blackberry has such great potential to tap their own brand enthusiasts for efforts like this … but they fall short in this campaign in several ways.  Without further intro, here are some of the key mistakes and thoughts on how Blackberry might have been able to execute this campaign idea differently:

Does anyone have any other thoughts on something I might be missing here?  Would love to hear more from other folks who are launching (or considering launching) new User Generated Content campaigns using social media and struggling with some of these issues …