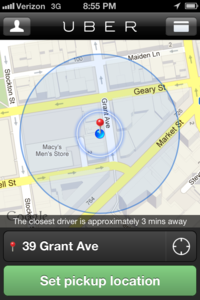 Several weeks ago I was standing on a street corner in New York. (This is not the sentence I thought I'd start this post with, but go with me …) After unsuccessfully trying to hail a cab, I decided to try out an app I had heard about called Uber. I had heard it was useful for those kinds of situations. From the moment of signup – a process which took way less time than I expected, to the actual act of immediately booking a car and heading happily on my way to LaGuardia Airport just 15 minutes later – the experience transformed my NY trip. Experience itself is getting lots of great media attention for solving a big problem in the taxicab experience – but what was particularly interesting for me, of course, was the marketing lessons their successful experience can offer. Here are five big lessons you can learn from Uber:

All of these together make Uber probably my favourite new app … and marketing story to offer lessons to each of us no matter what we are trying to promote.