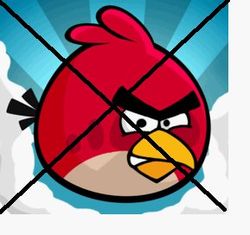 Imagine you're the marketing team at the Audubon Society, a group that has been around for nearly a century and your mission for that time has been to promote better man-bird relations — how would you respond to a internationally addictive game which has been downloaded more than 400 million times that portrays your heroes as "angry" and encourages people to toss them into stuff for prizes?

The question probably isn't a fair one, as I imagine the Audubon Society probably hasn't lost much sleep over how the wildly popular Angry Birds mobile game has portrayed birds … but it does bring birds and the pasttime of "birding" some long overdue attention.

Birding, as I once learned from one of my professors of English who was addicted to the activity, usually involves heading out to the forest and looking through binoculars and cameras with zoom lenses for different types of birds. Once seen, a bird is typically logged into a birding journal or documented 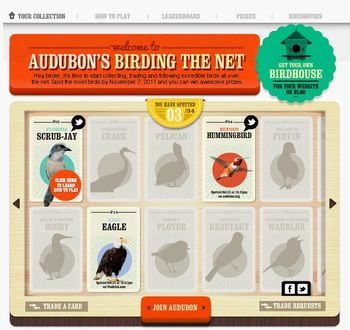 via a photograph, and birders spend their time collecting long lists of exotic or rare birds that they have seen (the rarest of which are called "life birds") and compare lists with one another.

Earlier this month, The Audubon Society launched what is quickly becoming another addictive bird-focused game online called "Birding The Net." Tying into the upcoming Hollywood movie release of The Big Year – an upcoming Hollywood film featuring Steve Martin and Jack Black where characters compete to see the most North American birds in one year – the game is built on Facebook and offers a virtual version of bird watching where participants are challenged to find birds spread across the Internet and collect the most in order to win prizes. 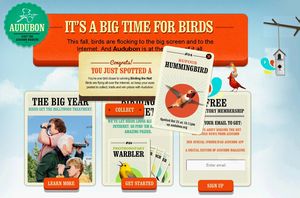 As David Yarnold, President and CEO of Audubon describes, “birds are the best possible ambassadors for the environment, and this will help people see them in a whole new way. This is about fun – but it’s also about getting more people involved in taking action to protect birds and the planet we share with them. And with this unprecedented use of social media and the web, we’re also making it clear that this is not your grandmother’s Audubon.”

The game, which you can get a taste of on this blog for a week by clicking one of the birds above, will run through November 7th and I predict it will succeed brilliantly as a marketing strategy for Audubon Society. Spending some time looking, it offers at least five good lessons for marketers:

Ultimately, Birding The Net stands is one of the most original uses of social media and gaming I've seen lately to achieve the dual purpose of promoting an upcoming movie as well as reminding people that a pasttime which has been around for centuries can still offer a thrill not only in the virtual world … but if you shut off the technology and head out into the real world as well.

Video Introduction To Birding The Net: