I remember a cold morning in January, piling onto the Metro and heading with hundreds of thousands of other excited and frozen people to stand outside and watch the inauguration of Barack Obama. As you would expect, emerging in DC there were tons of vendors selling every kind of souvenir imaginable. Bobble head dolls, tshirts, mugs, and American flags spread as far as you could see – on the rare occasion that you could see, between the wall to wall people all seeking their spot. This was the largest mass event I had ever been to. 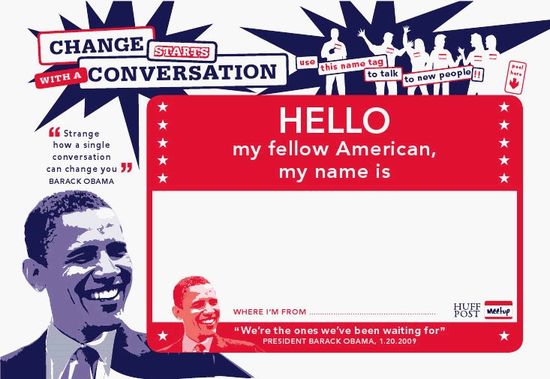 Walking off the Metro, though, the first thing someone gave me was a nametag. Actually, it was more than a nametag. It was an invitation not to be faceless at a faceless gathering. It was a challenge to be approachable to a stranger. I wore it most of the day. Before that day, I had heard about a guy who wore a nametag every day, 24-7. Around the same time of the inauguration, I got an email from someone named Scott Ginsberg who had read my book and thought we had similar philosophies.

As it turns out, Scott is the Nametag Guy – and has spoken all over the world about approachability, written a bunch of highly entertaining and useful books and also writes a great marketing blog. So, how does all this relate to SXSW? Scott and I started talking about this huge annual music, film and interactive festival that happens in Austin every March. They were accepting submissions for proposed panels and the deadline was closing soon.

So Scott and I started talking about approachability and authenticity and how it has become a huge buzzword for companies (and people). Both of us felt like there was more to it than that. Authenticity, in short, is overrated. So we decided to put together a proposal for a session like neither one of us has done before, all about what authenticity really means, and what you have to do to get past the buzzword facade.

Our session, "Authenticity Is Overrated" is now live as part of the Panel Picker – an online tool that SXSW uses to help determine which sessions to include in the program for 2010. Check out the description here, and if you feel it's worthy, please vote for it before September 4th!