Just a few minutes ago, Barack Obama was officially declared the winner of the Presidential election and my vote in Virginia was officially deemed to mean something for the first time by going for the Democrats as part of Obama’s huge victory. Looking back, there were many marketing lessons that any business could learn from Obama’s campaign, but perhaps the strongest is the power of having a strong AND shareable brand. Obama’s logo and brand identity were consistently used across all his communications, but also treated with a flexibility that would drive many holders of a brand identity completely mad. Instead of taking a closed approach to his brand identity, the Obama campaign let people remix the brand for their own uses.

To take an inside look at the power of this brand, I created two visuals that I believe pretty much tell the story of the power of Brand Obama and how it was used to help him win the US Presidency in a way that is much more powerful than I could ever describe. Check them out below and congratulations to Barack Obama and all his supporters for a big win tonight! 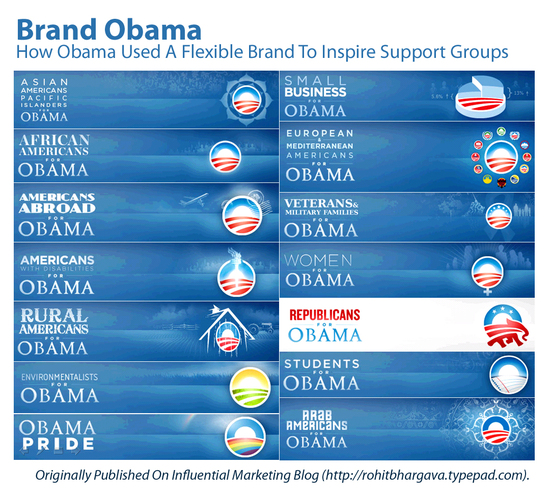