When I boarded my flight to Beijing, I didn’t have a single ticket for any Olympic events and I wasn’t worried. To understand why, I need to tell you about my best day during the Summer Olympics in Sydney in 2000. I was living there and had one night where I was heading out to see a Handball match (by far my favourite Olympic sport, by the way). I got two tickets last minute and knew nothing about the sport. When I turned up, I was surprised to learn that the sport is basically a cross between soccer with your hands and water polo without the water. It is fast, challenging, and amazingly fun to watch. I discovered a new sport that day, but that wasn’t even the most memorable part of the day. Right after, I managed to get a table at famous S-shaped bar at the one hotel which was at Homebush Bay (the main Olympic Area) outside of Sydney. At the table, we sat with several athletes from different countries including an Eastern European gymnast and an African track and field athlete. I don’t remember their names, or even what we talked about … only that it was one of the most authentic and powerful Olympic experiences I could imagine. And it wasn’t about watching an athlete break a record or win a medal. It was a quiet moment at a shared table over a bottle of wine talking to two athletes who were considered the best in their countries in their respective sports.

So when I headed to Beijing, it was not with the goal of getting tickets to lots of events. It was about finding a moment where I could share a real story and an authentic Olympic moment with an athlete. Last night we had a chance to have a moment like that as part of a blogger meetup we organized over Twitter for a few local bloggers in Beijing and some of our athletes participating in the Lenovo program. We ended up having dinner with two Namibian cyclists, both of whom were competing for their country – Mannie in Mountain Biking and Erik in Road Cycling. As we sat there and listened to their stories of making it past the trials and what it took to be the ones their country sent, it was easy to remember why the Olympics are the most powerful global event in the world. 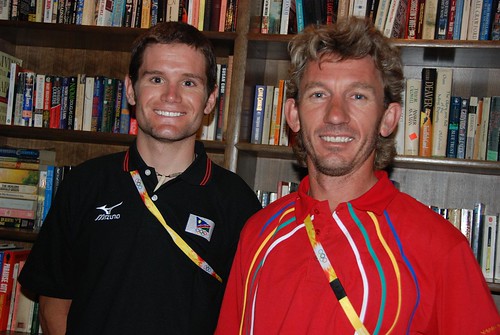 Mannie competes on the second to last day of the Games, but talking to Erik was a great reminder of just how much every athlete trains and struggles just to be part of the Games, and how proud thousands of people none of us can see will be of them when they return home. Erik realized a personal best and finished 22 out of more than 100 of the finest road cyclers in the world after riding for over six hours. This is what the Olympics are really about. Not the hurdler who conquers personal tragedy and cancer of the kneecap to win the Gold. That’s the Hollywood version. The real life story is about the guy who beats his one biggest competitor to be the sole athlete in his sport that his country sends to Beijing. The one who misses marching in the Opening Ceremonies to rest so he can compete at 9am on the first day of the Olympics. The one who rides his bike in hot and humid weather for more than six hours among the best cyclists in the world. And the one who beats the odds to finish a personal best of 22nd so that he can go home a hero.