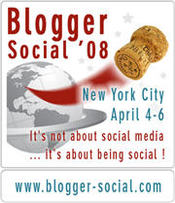 This past weekend, I had the lucky chance to connect with more than 85 marketing bloggers at Blogger Social – an event put together mainly by two marketing bloggers, CK and Drew Mclellan (along with the help of many other volunteers). The entire weekend was a chance for bloggers who have been online friends for months or even years to finally connect with one another and brought together the traditions of an unconference with the slight cheesiness of a class reunion.  Yes, most people even called the formal second night dinner the "blog prom." Aside from having a chance to connect with many other bloggers I both read and respect, it was also my first big giveaway of PNI … as I gave a copy of the book to all the attendees in the gift bags.

Doing that, I learned a couple of big lessons:

To focus on the last point … I held a brainstorm event on Saturday morning as part of Blogger Social where I invited people to brainstorm ideas on how they would market Personality Not Included if they had 25 copies and $200. The group shared many brilliant ideas, which I will share tomorrow in a blog post over at the Personality Matters blog (along with the winning idea). After the event, I was settling the bill with the team at ‘sNice Cafe in Greenwich Village and was talking to them about the book. I had a few left over copies so I gave one to them. This is where karma came in …

The rest of the team who had been at the brainstorm had left to catch the blogger cruise. I stayed a bit longer and while I did, Malcolm Gladwell walked in to get a cup of tea. I recognized him, introduced myself, told him quickly about the book (trying to be as non-dorky as possible) and gave him a signed copy. Now I’m not sure if he will even look at it, but I walked out amazed that I managed to meet him.  More significant, though, was my later realization that it only happened because I stayed an extra few minutes to give a copy of my book to an interested barista in a local coffee shop.