The author of one of the greatest blogs on the Internet announced a few weeks ago that he would be posting far less often.  In a world where it seems that everyone (and their mom) is starting a blog for one reason or another, seeing one prominent and popular blogger decide to do it less often captured my attention, and it should capture yours too.  The blogger I’m talking about, of course, is Scott Adams – creator of Dilbert.  His blog serves up his signature wit in narrative form and offers his reasoned approach to highlighting stupidity in the world, both inside and outside of the workplace. 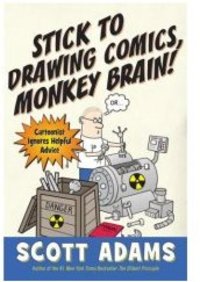 and noted on his blog that his original reasons for blogging were fourfold:

Ultimately, he realized he was failing on two of these counts, and his experience offers an interesting case study of a situation where blogging may not be the panacea that many marketers today are tempted to see it as.  He notes in his post that though he gets great satisfaction from writing on his blog, he sometimes offers political commentary that some Dilbert readers don’t understand or agree with.  His voice, in my opinion is a brilliant and necessary one on the wrong choices that society and politicians are making all around us … but the problem that he faced was that readers and lovers of Dilbert did not necessarily translate into fans of his blog.  Invariably, he would get comments from people who would swear never to read Dilbert again because of what he said on his blog.  Right or wrong, the blog ended up lowering Scott’s audience, not increasing it.  That combined with the fact that people were using RSS feeds to get around the ads meant that reasons 1 and 3 from his list of reasons to start blogging were not coming true.

You can certainly argue with Scott’s desire to make money on his blog or fault him for having the wrong expectations about what his blog could achieve … but his example offers an important lesson about blogging.  Great content is not enough to keep and sustain a blog if your blog creates a blog dissonance (an inconsistency between your blog and your brand).  The power of blogging is that it can bring your identity forward to help you more authentically connect with your audience.  The problem for Scott is that the voice many Dilbert readers expect from him is the voice of Dilbert … not the voice of Scott Adams.  For people like me, who think Scott himself is brilliant, we are likely to read the blog.  For other Dilbert readers, however, the blog is a different voice to that of Dilbert.  It is the classic writer/actor versus character problem.  It is why people still walk up to Patrick Stewart and call him Captain Picard, or why Michael Richards will always be Kramer.  It is also the reason why the Dilbert Blog, written in the voice of Scott Adams created a blog dissonance.  Free or not free, if your blog ends up having a different voice than what your audience expects, then you may need to come to a similar realization about your blog.