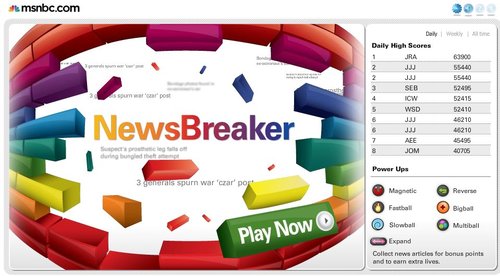 Standing out for your online news offering is rapidly becoming almost impossible for publishers.  After all, as we each get smarter about using RSS feeds to only get the content we want, the old "news portal" sites of several years ago are becoming less and less important.  Add to that the rise of "social news" and the idea that user ratings on stories are a new replacement for the front page editor, and you have a media environment where online news providers are very right to be worried.  Combating this, many are taking new approaches to presenting news in a blog-like format, such as what AOL News has recently done.  Ultimately, this is an evolution rather than a revolution (though a very good one for AOL).  MSNBC is trying a different approach with their Newsbreaker online game, Spectrum TV spots , and Newstream Screensavers (all part of the "Fuller Spectrum of News" campaign).  The idea is simple – portraying all the different news stories as colours of the spectrum (which, by the way, relates perfectly to NBC’s longstanding peacock logo).  It’s a smart branded campaign executed to help MSNBC break out of the online news category and (perhaps accidentally) lead the way into a new category of visual news.  The elements of this campaign work for several reasons:

The only thing missing from Newsbreaker is a quick button to hit that pulls up an Excel spreadsheet if the boss is walking by and sees you playing what seems to be a game.  Luckily for me, playing that game could probably be considered part of my job.  Now all I need is for the folks from MSNBC to make this into a game for the Blackberry.  Hours of waiting at airports and riding in Taxis is making me desperate for a new game other than Brickball.  I hate when bricks are all the same colour.