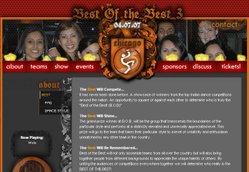 Believe it or not, there are many people who don’t know what a mashup is.  If you ask those same people about what "fusion" means, most would probably be able to give you a better answer.  The reason is that fusion is a concept that has been around a lot longer than mashups, and it’s part of our daily lives.  Most obviously, fusion has grown as a concept because of food and restaurants.  It’s common today to find a French-Indian restaurant, for example, and the food represents a blend of culinary styles from those two areas.  I was reminded of the power of fusion this weekend as I had the chance to attend the Best of the Best Indian Dance Competition (BOB Chicago) in Chicago.  Essentially, the show is an extension of a series of competitions that happen across college campuses throughout the year.  These competitions feature dance teams, not unlike the cheerleading competitions on ESPN2 – however the types of dances are distinctly Indian.  At the show there were three categories, Bhangra, Raas/Garba, and Fusion.  The most popular dance troupes were the ones from the fusion category, who mixed traditional Indian dance moves with other styles like Hip-Hop, Step and even Tap.  The winning group was one from UCLA that presented an engaging fusion act with American and Indian influences mixed together.  Fusion was the theme of much of the marketing at the event as well, as sponsors included companies like DesiThreads and DesiHits (promoted as the first official Desi iTunes music store).

As many organizations start to focus more of their marketing strategy on multicultural audiences (and the smart ones start thinking outside the narrow parameters of African Americans and Hispanics as the only multicultural audiences that matter), the idea of fusion will continue to be more important.  It will reflect itself in several ways.  Language will be a part of this, as marketing goes bi-lingual you will start to see messages relayed in a fusion of two languages simultaneously.  At the moment, this is mostly regional – as anyone who has listened to radio stations in Miami will understand.  As ads and commentary on many stations are already in a mix of english and spanish, the cultures are blending and fusion marketing is reflected in the mixed language of "spanglish" that has emerged.  For other cultures, fusion comes through events or food and restaurants.  This growing area and the emergence of mashups are related – but when reading everything about mashups, it’s easy to see this as a phenomenon limited to the area of consumer generated media.  Fusion is much broader and has even more potential beyond just thinking about mashups.  Whether it’s integrating fusion into your current efforts, or just considering sponsoring new events and participating in set activities- it’s time to think about how fusion could help you market your brand.  Judging from the lack of focus in this area from most brands, it’s certainly an area that offers a strong opportunity to stand out.