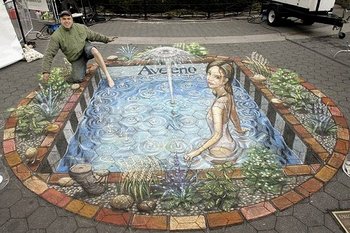 I am in New York today working on an interesting project for Aveeno where we have commissioned Julian Beever to create a three dimensional pavement painting as part of the skincare brand’s support for the social marketing campaign – Keep America Beautiful.  For those unfamiliar with Julian’s work, he is known as the "Pavement Picasso" and has a huge following in Europe, Australia and many other places outside the US.  This commissioned piece is his first in New York and was officially unveiled at 10am this morning in Union Square.  For those of you in New York, you can head out anytime today to see the drawing in person – and perhaps even make a wish and throw your own coins in the fountain to help support the Keep America Beautiful campaign.

There will be a viral video we are posting on YouTube early next week that is a time-lapse of the creation of this fountain (the first such video of his work to be published online) and there are several other activities planned to help get the word out about the campaign.  It’s a great example of a fun stunt that is designed to drive awareness for Aveeno, and also support for the Keep America Beautiful campaign.  I’d love to hear your thoughts about it (especially those in NY who are able to make it out to see the painting in person).  For everyone else, you can check out a gallery of all of Julian’s past work on Flickr, and add your own comments.