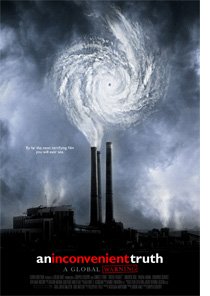 One of the more anticipated documentaries coming up for widespread release across the country is the new film "An Inconvenient Truth" – focused on telling the real story of global warming and leveraging the growing popularity of Al Gore’s "resurrection" (as Wired magazine termed it) from the "former next president of the United States" – to a global citizen and "fearless environmental crusader" in the fight against global warming.  Over the past few weeks, I have seen many interesting marketing tactics come from the promoters of the film, inspired by eadvocacy and social marketing – and grounded in a strong understanding of the world of personal media and how people are consuming content today.  The end result is an engaging campaign that may serve as a model for other documentary releases, as well as social marketers focused on raising awareness about a particular issue. Here are a few tactics and lessons I was particularly engaged by:

Ultimately, I think the campaign to market the film presents an interesting case study for any marketers of a socially charged documentary or other social marketers to pay attention to.  Aside from a few small criticisms of the lack of mobile marketing techniques or the mystifying choice of barely legible light gray for HTML text on the site – the smarts of this movie marketing strategy should do well to drive people to the theater to see this film.  I’ve made my pledge.