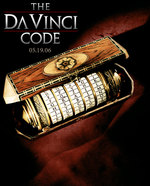 After much fanfare over the last few weeks, The Da Vinci Code opens in theaters across the US today.  Though some early reviews from the Cannes Film Festival premier have been less than perfect, there is no denying that the marketing machine behind the film has generated buzzworthy firsts, from partnering with Google to open up it’s tightly guarded homepage to a marketing promotion – to successfully repositioning a controversial film about religion to something much broader.  In looking at the marketing of the film over the past few months, there are several key lessons that emerge which make this a marketing campaign to remember:

It will be interesting to watch how the movie does at the box office this weekend (my friend Gitesh, the Box Office Guru, should have updated figures on his site through the weekend), but by many marketing metrics that have appeared in press recently (such as 30% of Sony’s overall site traffic arriving due to the Google promo) – I’d say the campaign has already been a huge success.  Not that the movie needed any more buzz marketing – but as an example of how movie marketing is reinventing itself, and the direction Google seems to be moving towards … this will be a marketing campaign that people in the industry will be talking about for a long time.